In our tradition we divide the year not only by eight solar and agricultural holidays, but also by the Kalends. We celebrate twelve months of the year by the common calendar, plus a special thirteenth month for Samhain.  These month cycles are associated with different totemic spirits. Each month is assigned an animal, a bird (or other flying creature), and a tree.

June's totems are the Stag, the Robin, and the Oak. These symbols are each associated with the Oak King who falls in battle at Midsummer which is mid-June.  Also we associate Midsummer with Cernnunos, who we honor as the Oak King, Lord of the Castle of Stone. 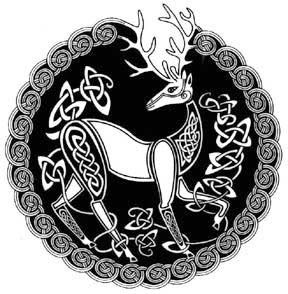 The Stag is the male aspect of the deer. As such, some discussion of the qualities of deer in general is helpful to understand Stag. Deer are associated with gentleness, innocence and a luring to new adventure. They are very adaptable, and they are native to every continent except Australia.

Many legends exist in which deer lure hunters and/or kings into the forest for adventures. One prominent example of this is the story of Gawain and the White Hart. Gawain followed the Hart willingly, though the pursuit ended in an unpleasant realization of Gawain’s own shortcomings. However, by following willingly and facing his darker nature, Gawain was able to confront his rage and learn to control it, making him one of the best Knights of the Round Table.

The Stag is a symbol of pride and independence. He is an example of grace, majesty, integrity, poise and dignity. These are indeed kingly qualities, so it is no wonder that there is a deer referred to as King Stag. In fact, this King Stag is associated in many ways with the Lord of the Wild Hunt, as both are responsible for protecting the herd and culling it of weaknesses.

The Stag is one of the five Oldest Animals in Welsh tradition. He leads a willing seeker deeper into the Mysteries and into the Otherworld. He is a guardian of the gateway between this plane and the Otherworld and delivers messages from that realm.

The Stag’s antlers are made of bone and shed every year for 5 years. (In some species, both the male and female have antlers). The antlers start to grow in early summer and are fully developed by rutting time (late Autumn). The Stag sheds antlers around Imbolc (before birth of young). The antlers are protective by nature, and they also represent higher levels of attunement.

The Stag is a symbol of fertility and rampant sexuality, which is also related to the Lord of the Hunt and the Horned Gods.

Mankind has honored the power of Stag for centuries. Images of Shamans dressed in antlers and deer skins are often found in folklore and legend. A famous example of this is the Gundestrup Cauldron, on which we find the most familiar image of Cernunnos as an Antlered Man. To this day, we dress in antlers and skins to portray the power and dignity of the Stag.

You can learn more about our tradition's wheel of the year through this link.
Posted by Laurelei at 10:27 AM