In our tradition we divide the year not only by eight solar and agricultural holidays, but also by the Kalends. We celebrate twelve months of the year by the common calendar, plus a special thirteenth month for Samhain.  These month cycles are associated with different totemic spirits. Each month is assigned an animal, a bird (or other flying creature), and a tree. Samhain's totems are Toad, Elder, and Crane 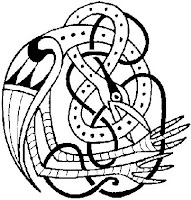 The Crane is an ancient and powerful symbol to many cultures. To the Chinese, it is a solar symbol, one of justice. It is also a modern symbol of wildlife conservation (and a deeper spiritual practice, too, of recovering what is becoming extinct within the self). The Crane represents longevity and creation through focus. In Celtic lore, Cranes are often associated with the Underworld and are thought to be heralds of war and death.

Cranes are protective/secretive parents. They lay two eggs, but raise only one, which gives them the connection to focus and undivided attention. They are also associated with perseverance due to the fact that they will stand for hours looking into the water and waiting for the right time to strike at fish. The Crane can help us to concentrate without distractions. They also represent longevity of life span. There is a crane, for instance, on the island Inis Kea who has been there since the beginning of the world, and it will stay there until the world’s end.

The Crane symbolizes “secret knowledge” which is represented by the Ogham script of the Celts.  This form of text is said to be based on the shapes of the Crane’s legs as they fly, and one can say that learning the secret knowledge of the Crane is learning to read the “book of nature.” The phrase “Crane Knowledge” indicates the knowledge of the Ogham alphabet, but it also implies an understanding of the world that goes deeper and has connections to many Realms – including past-life knowledge, predicting rain storms, etc.

The Crane bag is the Druid’s medicine bag (in which he carried his Koelbren lots – or carved Ogham staves). The Crane Bag is a symbol of the fetal sac or womb and has connections to the things we carry from one life to another. Certain Gods are said to have carried a Crane Bag. Manannan’s contained his own shirt, a strip from a whale’s back, the King of Scotland’s shears, the King of Lochlain’s helmet, the bones of Assail’s swine and Goibne’s smith-hook.

The Crane is often a guide to the Underworld, whether at the time of death or during an inner journey. These birds are often shown in groups of threes. For instance, three cranes protect entrance to Annwn, three cranes appear on a bull’s back in several drawings, and three cranes guard Midhir’s castle. Furthermore, cranes are said to dance and fly in circles (and are, therefore, said to be the basis of the triskele symbol).
Posted by Laurelei at 10:01 AM