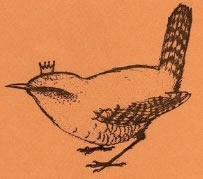 Of all of the birds venerated by the Celtic peoples, and associated with the Druids, the humble wren is the most revered.  The wren was said to be crowned the king of the birds, after riding an eagle to the highest point in the sky, above all other birds, and then soaring above even the eagle!  The wren is noted for its cunning for this stunt, and for the trick of building many false nests to lead away hunters.

Breton Druids claimed that it was the wren who first brought down fire from heaven, forever singeing its tail feathers, causing the wren to have its distinctive blunt tail.

There is a Manx legend of a mermaid who transformed into a wren, causing sailors to wear wren feathers when at sea to protect them from drowning. 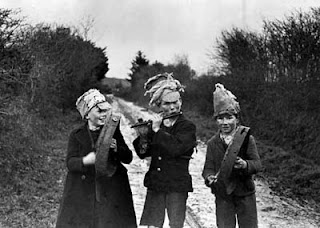 The wren, mighty king of the birds, dies a king's sacrificial death each year on St. Stephen's day (December 26) when it is hunted by the "Wren Boys".

Irish tradition holds that the wren symbolizes the old year (the Holly King), while the robin symbolizes the year to come (the Oak King, born as the newly risen sun at Yule).

Originally, groups of small boys would hunt for a wren, and then chase the bird until they either have caught it or it has died from exhaustion. The dead bird was tied to the top of a pole or holly bush, which was decorated with ribbons or colored paper.

Early in the morning of St. Stephen's Day, the wren was carried from house to house by the boys, who wore straw masks or blackened their faces with burnt cork, and dressed in old clothes. At each house, the boys sing the Wren Boys' song. Such as:


The wren, the wren, the king of all birds,
On St. Stephen's Day was caught in the furze,
Although he is little, his family is great,
I pray you, good landlady, give us a treat.

My box would speak, if it had but a tongue,
And two or three shillings, would do it not wrong,
Sing holly, sing ivy--sing ivy, sing holly,
A drop just to drink, it would drown melancholy.

The wren, the wren, the king of all birds,
On St. Stephen's Day was caught in the furze;
Up with the kettle and down with the pan,
Pray give us a penny to bury the wren.

Sometimes those who gave money were given a feather from the wren for good luck. The money collected by the Wren Boys was used to hold a dance for the whole village, known as the "wren dance".