In our tradition we divide the year not only by eight solar and agricultural holidays, but also by the Kalends. We celebrate twelve months of the year by the common calendar, plus a special thirteenth month for Samhain.  These month cycles are associated with different totemic spirits. Each month is assigned an animal, a bird (or other flying creature), and a tree. October's totems are Salmon, Hazel, and Lapwing. 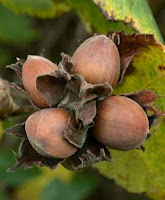 The Hazel is deciduous and grows to the height of a small tree/large shrub – 12-20 feet tall. Hazels are plentiful in copses, oak woods, and hedgerows, and they thrive in damp places near ponds and streams. Their bark is smooth and light brown with lighter brown specks that are the pores of the tree. They have tough, elastic stems and slightly heart-shaped, asymmetrical leaves.

Hazel’s magical associations include fertility, wisdom, marriage, divination, healing, protection, intuition, dowsing wands, individuality, finding the hidden, luck and wishes. Hazel’s atmosphere brings exhilaration and inspiration, and it has been called the ‘Poet’s Tree.’ It has associations with faerie lore and entrance into faerie realms. It is aligned with the element of Air and with the feminine.

Hazel is one of the “Seven Chieftain Trees” of the Celts, and the unnecessary felling of hazel trees brought the death penalty in Ireland.

The Hazel is considered to be the Tree of knowledge for the Celts. Its nuts are ultimate receptacles of wisdom. Hazelnuts were considered the food of the Gods.

Hazel was used in combination with other woods (oak, apple and willow) for various magical purposes, and it has associations with love divinations and love wands (possibly due to the shape of the leaves).

Because it is plentiful near water, Hazel is associated with wells and springs. For example, nine hazels of “poetic art” surrounded Connla’s Well, the destination and home of the first salmon. Magically speaking, silver snakes and silvery fish dart around its roots, which signifies swift energy. Hazel brings speed through the air and water.

In Cornwall, it was used for dowsing (to find water, ley lines, thieves, murderers and treasure). In France, it was used for beating the bounds (to define the boundaries and make sure they didn’t fall into a state of neglect). In Wales, twigs were made into wishing caps.

Hazel’s healing qualities were used to cure fevers, diarrhea, and excessive menstrual flow. The kernels were used for clearing cough and head congestion. The nuts were used in divination rituals, especially concerning love.

Hazel wands or rods bring poetic and magical inspiration. They can also be used as “talking sticks” for order in large group discussions. The Druids also believed they could achieve invisibility from hazel rods fashioned in a certain manner.
Posted by Laurelei at 10:04 AM