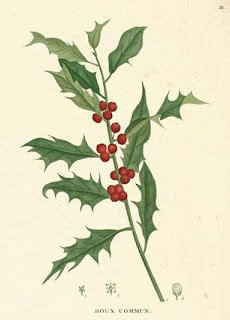 The Holly is a small tree/large shrub that grows to about 30-40 feet. It blooms in May, and its flower’s petals form an equal-armed “cross” which resembles a star. The berries are poisonous to all but birds.

The Holly is the strongest protective herb, offering protection against evil spirits, poisons, short-tempered or angry elementals, thunder and lighting, and uninvited spirits. As an evergreen it represents immortality and is said to bring luck and prosperity. It is also associated with dream magic, clear wisdom and courage.

In winter Celtic peoples took Holly into their homes to shelter elves and fairies, though it was critical to remove them before Imbolc Eve since faeryfolk couldn’t live peacefully with humans beyond this day. Long associated with Midwinter religious observances, its bright leaves and colorful berries lift the spirits and ward against depression, which is more likely to occur during the cold and dark winter months.

Holly branches shouldn’t be cut, but rather pulled free, as is usually the custom with sacred trees. It is said to be unlucky to burn or bury green-skinned holly branches. If a holly branch from the Yule decorations is hung on the door throughout the year it will protect against lightning. A Holly berry carried in a man’s pocket makes him more attractive to women.

Holly wands are said to have the strength to compel. The wood is used for making spear shafts, thus associating it with warrior pursuits

Holy, Holy, Holy:
Praise be the Skull-Tree of Cain!

O Blessed Head on Hulver throne
I call thee by thy Names Unknown:
Father of Good Death, Lord of Bone;
Green-crown'd as Man-of-the-Wold,
Bejewel'd with the Year's own Blood,
And corpses of the Kings of old.

Now rouse the Rustic Army all
The Wild Host shall heed thy call,
And fight where all thy shadows fall:
Then go thou forth in battle brave,
Raise thy rugged Hollin-stave
And lay the sun-gods in their grave.
Praise be the Skull-Tree of Cain!

~Viridarium Umbris: The Pleasure Garden of Shadow by Daniel A. Schulke 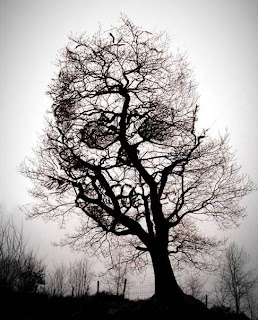