In our tradition we divide the year not only by eight solar and agricultural holidays, but also by the Kalends. We celebrate twelve months of the year by the common calendar, plus a special thirteenth month for Samhain.  These month cycles are associated with different totemic spirits. Each month is assigned an animal, a bird (or other flying creature), and a tree. August's totems are Swine, Vine, and Hawk. 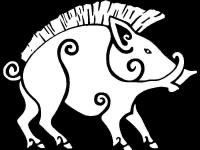 The Boar is as symbol of the Warrior spirit, leadership, and direction. It is wild and powerful. The Boar calls you into forest to discover a secret about yourself. The Boar has a raw power that can be very destructive, but can be channeled.

There are ritual boar paths in Wales, Cornwall, Ireland and Scotland. These paths exist in the Inner Realms, too.

The Boar’s tusks and comb are significant and are frequently mentioned in lore. Furthermore, combs and mirrors depicted beside boars in Scottish rock-carvings. This animal’s image was often used as emblem on helmets and mouthpiece of battle-horns to terrify enemies and on swords and bronze shields to protect the warrior.

It is a secretly (inwardly) feminine symbol that is connected with healing as well as destruction. In Scotland, women would give birth at the Boar Stone, with their bare feet on the stone to absorb its power. In Celtic terms, hunting and healing seen as connected.

The sow is a symbol of nourishment, as swine are a particularly potent food source. Indeed, it is said that "everything but the oink" is used as food.  Just as the sow gives life as food, so does she take life away.  Any pig farmer can attest to the practice of sows eating their own piglets after birth.  The sow is therefore symbolic of the Goddess who is death-in-life and life-in-death.

The sow is especially associated with Cerridwen, whose name is sometimes translated as "white sow", making her association with September particularly potent.
Posted by Laurelei at 10:18 AM