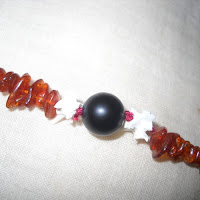 Black, White and Red are reoccurring themes throughout our Tradition.  They are reflected in the Gods, the cords, the knives, the Triple Soul, and our Witch regalia.  This regalia includes a traditional Amber and Jet necklace, with the addition of bone.

Amber, jet and ivory jewelry has been found in Beaker-people tombs in Spain, and amber and jet jewelry was a common feature in Scottish barrow mound tombs of the Neolithic period (approximately contemporary with the mastabas of the archaic period of Egypt, the brick temples of Sumeria, and the first cities of the Harappa culture in India).

Amber and Jet are traditional ornaments of rank in British Traditional Witchcraft. In Gardnerian Craft, the High Priestess is permitted to wear amber and jet jewels upon obtaining Third Degree.

Amber and Jet are unique to the world of gemstones in that they each are capable of holding a negative charge, allowing them to attract small particles of positively-charged objects.  This "inner electricity" has been valued by magical practitioners and shamans for countless ages. 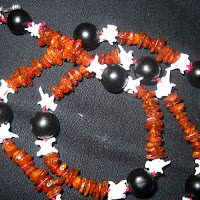 Amber is fossilized tree resin (not sap), which has been appreciated for its color and natural beauty since Neolithic times.  Amber has been used since antiquity in the manufacture of jewelry and ornaments, and also in folk medicine. Amber also forms the flavoring for akvavit liquor. Amber has been used as an ingredient in perfumes.

Amber occurs in a range of different colors. As well as the usual yellow-orange-brown that is associated with the color "amber", amber itself can range from a whitish color through a pale lemon yellow, to brown and almost black. Other uncommon colors include red amber (sometimes known as "cherry amber"), green amber, and even blue amber, which is rare and highly sought after.

The Greek name for amber was ἤλεκτρον (elektron), "formed by the sun", and it was connected to the sun god Helios, one of whose titles was Elector or the Awakener. According to the myth, when Helios' son Phaëton was killed, his mourning sisters became poplars, and their tears became the origin of elektron, amber.

The modern terms "electricity" and "electron" derive from the Greek word for amber, and come from William Gilbert's research showing that amber could attract other substances.

Some very convincing artificial amber is currently on the market. Real amber releases a piney, resiny scent (rather than a chemical, burnt-plastic smell) when touched with a hot pin. Amber warms to slowly to the touch and is very lightweight.  Try to purchase your amber from a reputable source.

Because amber, unlike other gemstones, is warm to the touch and often contains insect fragments, it was thought to possess life. It was once believed to contain the very essence of life itself - the animating principle.

Due to the fact that amber is a fossil, is has associations with time, cycles and longevity. As it once was a living substance, it is related to spirit.  All of these mysterious properties and associations make amber on of the most widely used and prized magical substances of all times and places on Earth.

Yellow/Gold/Orange amber is said to enhance the beauty of the wearer. It is used to tap into the power of the Sun, and is good for success, abundance, healing, vitality and joy. It brings the energies of patience, protection, psychic shielding, romantic love, sensuality, purification, balance, healing and calmness to those who wear or carry it. It is considered a good luck charm for marriage.

A powerful stone for manifestation, amber is also used for healing of the physical body as well. For over 7,000 years it has been used to stimulate the metabolism and treat skin ailments caused by a metabolic imbalance. Because of it's warmth it is used also in the treatment of asthma and allergic respiratory problems. Generally wearing amber in a necklace is the most effective for this ailment.

Amber carries a negative electrical energy charge and therefore is good to draw power and energy into its bearer. Amber gives a soothing, light energy that is both calming and energizing at the same time. It can help manifest desires and heighten intellectual abilities, clarity of thought, and wisdom. It cleanses its environment by drawing out negativity, and relieves physical pain the same way.

Cleanse amber under lukewarm water, when you notice that it warms ever so slowly when you wear it or hold it. Negative energy can make amber cloudy. Never leave amber in the sun as it may become brittle. 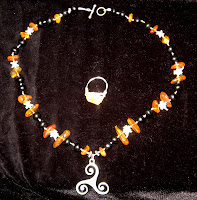 Jet is a product of high pressure decomposition of wood from millions of years ago.  The oldest jet jewelery was found in Asturias, Spain, dating from 17,000 BC. Whitby jet was a favorite material in the Roman period. It was seen as a 'magical' material, frequently used in amulets and pendants because of its supposed protective qualities and ability to deflect the gaze of the evil eye.

Jet has also been known as black amber, as it may induce an electric charge like that of amber when rubbed.

Unlike black glass, which is cool to the touch, jet is not cool, due to its lesser thermal conductivity. When rubbed against unglazed porcelain, true jet will leave a chocolate brown streak.  Real jet, when rubbed against your front tooth, feels like it's "writing," and if you breathe on it, it shows the condensation from your breath longer than onyx or most plastics. The touch of a red-hot needle should cause jet to emit an odor similar to coal.

Jet has historically been used as a protection stone and is said to have very powerful protection energies to ward off evil, negativity, as well as psychic attacks, it is considered one of the most powerful absorbers of "negative energy, i.e., depression. Because it absorbs so much negative energy, and therefore very beneficial if you are prone to depression or it's ailments.

Jet helps the wearer to be alert to all things and quickly come up with constructive solutions to any problems. Jet is said to control all demons and thus prevent demonic possession. It draws out negative energy from the aura, and can initiate psychic experiences. It uncovers past negative energies a person still carried in their subconscious mind, and will help in understanding and working with life and cycles.

Mystically, jet is considered a stone of sympathy, as it will provide great support and help alleviate the pain and suffering associated by separation of the death of a loved one.

It also helps to ease headache pain directly behind the eyes.

Jet is said to absorb and neutralize negative energy. Jet is believed to protect against nightmares and astral entities. Jet is also attributed with the property of increasing psychic abilities. The black nature of jet also associates it with the Underworld, and with spirits & deities of a Chthonic nature.

Jet should be frequently cleansed of the acquired negative energy and recharged by placing it in sea salt one night and among rock crystals the next. Neither water nor sun should be used in it's cleansing and charging. 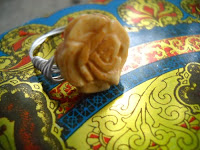 Bones are symbolic of the Red Soul, or Bone Soul, which is the eternal "self" that lives from each life into the next, and carries the mark of the Witch.

We use snake vertebrae in our own witch necklaces. The serpent is the symbol of kundalini energy, which Robert Cochrane writes about in his letter to Joe Wilson.  The spine itself houses the kundalini energy serpent, and the energy is raised by witches through mill-treading, seething, visualization, and other means.

We also use bone as our coven rings.  Bone roses are secured on sterling silver wire to create a ring that honors the compass, the Goddesses, and the vows of working Sub Rosa.

* Note: This article was adapted from a piece written by Laurelei for the Blade & Broom blog.
Posted by Laurelei at 10:16 PM