In our tradition we divide the year not only by eight solar and agricultural holidays, but also by the Kalends. We celebrate twelve months of the year by the common calendar, plus a special thirteenth month for Samhain.  These month cycles are associated with different totemic spirits. Each month is assigned an animal, a bird (or other flying creature), and a tree. February's totems are Cat, Willow, and Owl. 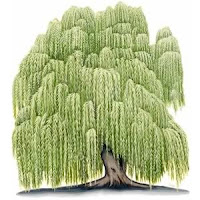 The willow has very feminine overtones. It is strongly lunar in its energy pattern. Willows are found at the edges of streams and lakes, giving them the elemental powers of both earth and water. The willow is a water-loving tree and responds to the lunar cycle.

The Anglo-Saxon welig (willow) means pliancy, and withy branches (or osiers) are cut from the willow to weave baskets, mend fences, and form frames for coracles. A coracle is a small keeless boat fashioned from a basket of willow withies and made waterproof by the addition of a tightly stretched hide.  No nails are used in the construction of a coracle, rather the entire boat is bound by weaving and plaiting.

The willow is thought to have healing properties over diseases of a damp nature. It is considered as a symbol of fertility and the female cycle. A chemical called salicin is extracted from the bark of the willow and used for the treatment of pain and fever. It is similar in chemical construct to asprin.

The willow can bring an awareness of your feminine side and is often associated with the Goddess Brighid because her festival of Imbolc falls within the influence of the willow tree.  In our tradition the willow, also known by its folk name "the tree of enchantment", is sacred to the Black Goddess.

As trees of enchantment, willow groves were used by poets, artists, musicians, priest and priestesses as places on meditation and inspiration.

Wands cut from willow are known as "willie wains" and are said to contain the powers of water and the moon.

To make a wish, tie a loose knot in a willow branch on a living tree, and state your wish, charging the knot.  When your wish comes true return to the willow, untie the knot, and make an offering of thanks for its aid.

Witches brooms are bound with willow, usually with birch twigs serving as the brush, and ash as the stave.  These three trees are the trees sacred to and surrounding the month of March, sacred to Hulda, mistress of the broom.

Magic mists are raised in folk tales by aid of the willow, and many stories tell of willows that uproot themselves at night to stalk unwary travellers.
Posted by Laurelei at 9:49 AM