In our tradition we divide the year not only by eight solar and agricultural holidays, but also by the Kalends. We celebrate twelve months of the year by the common calendar, plus a special thirteenth month for Samhain.  These month cycles are associated with different totemic spirits. Each month is assigned an animal, a bird (or other flying creature), and a tree. April's totems are Serpent, Ash, and Moth. 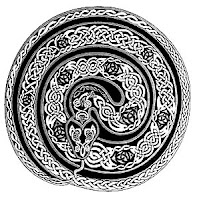 The Snake has a very paradoxical and mythical reputation. It is essentially associated with transformation, healing, and life energy.

Druids were sometimes called snakes or Adders. The story of St. Patrick ridding Ireland of snakes is viewed by most contemporary Pagans as a euphemism for killing the Druids. The serpent’s egg, or glain, was the most treasured possession of a Druid.

The Snake can glide through crevices into the Underworld. It represents our ability to die and be reborn, thereby symbolizing rebirth, resurrection, initiation and wisdom. The Snake can journey through life gracefully and magically, shedding old life easily when time comes. This shedding represents the higher wisdom that comes with the passing of time, symbolized by the ouroborus (a snake swallowing its own tail), which signifies eternity.

The snake is also associated with sexual energy, allowing us to be born. The image of the snake with egg in mouth – a Druidic symbol found on altars in Cumbria and Gloucestershire – is a symbol of the ovum and sperm united. There is an image of a snake with a double penis, which clearly represents fertility and is associated with Cernunnos. The Snake is not just seen as a depiction of male fertility, but of female fertility, too, as the mother snake gives birth to many young. In a magical sense, the Snake represents both physical and metaphysical procreation.

The Druids associated the Snake with Nwyvre , which is similar to the eastern concept of Kundalini. Kundalini, serpent fire, lies coiled at the base of the spine activating centers of awareness, health and creativity as we grow and develop. In this way, the Snake is responsible for the awakening of creative forces.

Since the Snake’s eyes cloud over before shedding, many have said that it has a trancelike appearance. This association with trance and hypnosis allow the Snake to move between the realms of living and dead. The eyes clear as skin sheds, which can be viewed as a symbol of seeing anew.

This totem is potentially poisonous , which renders it as a guardian of Mysteries. The Snake attacks quickly and is true to its mark. Along with its kin (dragons, wyrms, wyverns, etc.) the Snake is a guardian of treasures, springs of life, and sacred places.
Posted by Laurelei at 10:19 PM