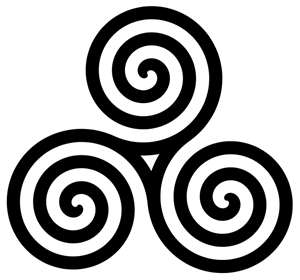 In most traditional cultures, people have viewed both the outer world and the inner planes are corollary concepts, where the macrocosm is a reflection of the microcosm, and vice versa. A great many of these cultures, including the ones from which the American Folkloric Tradition draws spiritual nourishment, see the Universe (both the inner and outer planes) as divided into three distinct realms of experience, wisdom, healing, and magic.

Worldwide, the Three Realms can be said to incorporate an Upper Realm (heavenly, celestial sphere), a Middle Realm (earthly, terrestrial sphere), and a Lower Realm (infernal, underworldly sphere). The beneficence or maleficence associated with these realms is dependent on the culture. Each has its own dangers and its own rewards. Each is inhabitant by its own sort of people, guarded by its own warriors, and ruled by its own leaders.

American folkloric practices draw most heavily from Celtic lore and Druidic practice. The Upper Realm is called Ceugent (ky-gent) and is an airy sphere of intellect, ideas,and future-sight. The Middle Realm is earthy Gwyned, which is the here and now, consensus reality. The Lower Realm is called Abred, and it is a watery realm of the subconscious, emotion, memory, and the past.

These realms are accessed spiritually through the use of shamanic trance techniques that generally incorporate the image of a World Tree or a Holy Mountain. Both of these images represent a concept called the Axis Mundi, the cross of the world. It is a nearly universally perceived spiritual and energetic construct. Carl Jung described this phenomena as the Collective Unconscious. It is also called the Consciousness Unit. However we define or describe it, shamans and witches have been going to the Tree or the Mountain since time immemorial to tap into the wisdom, insight, and healing that can be found within.

For purposes of spiritual travel (or "witch flight"), we use the image of the Spiral Castle (Caer Sidhe) spinning around to open its gate to the different points of the wheel of the year.  Its spire reaches up to the North Star, and its caverns are home to the great forge and the cauldron.  The pole is symbolized literally in our circles by the raising of the stang. By its virtue we can "ride" the stang to any place in the realms, though we may also use our own personal riding-pole, or gandreigh, to do so. Read more about the Stang and World Tree here.

Here are some associations for each of the three realms.